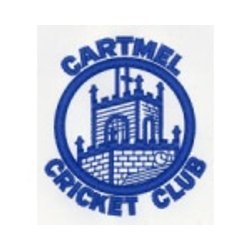 Division 2a - Clubs
Other clubs 

Cartmel Cricket Club, founded 30 June 1852…by The Earl of Burlington for workers on his Estate, and today, his ancestor, The Lord Cavendish of Furness is the Club President.

The ground (as far as we know) is unique, as it is the only one in the country situated entirely within a race course, and on a lovely summers day there could be nowhere better to watch the game.

We would probably consider the 70’s and early 80’s as the most prosperous time in our Clubs’ history. We won the League Championship, won the very first divisional cup and were area winners in the National Village Knock Out, travelling to Tudhoe as major underdogs and triumphing on the finest of margins … a better run rate over the 1st 15 overs. The next round saw us again travel to the North East and this time lost by just 10 runs to Backworth Percy..ah it was not to be.

The 1970’s also saw a host of County players grace the turf at Cartmel, amongst them: Farokh Engineer, Brian Statham, Norman Gifford, Alan Ormrod and Imran Khan, all playing in the benefit matches we staged, however, the best of all was when in 1978 we publicised a match between Cartmel CC and Worcester County CC. This was brought about by the friendship formed over the years between Basil D’Oliveira and the Club. He brought a team of 1st Class players to play the village boys as a thank you for the years of support we had given them. Over 3000 spectators watched that match- not bad for a village with only 500 inhabitants.

After our triumphant years the mid 80’s we saw a dramatic fall with many senior players retiring and we ended with our teams in the bottom 2 divisions of the league – this really was the bleakest time in our history, we were in freefall and nearly did not survive. We did, and that is down to the youngsters who took over, they had too, no-one else was left.
Many of them are still here today, David Unsworth, Tracey Williams, Tony Hadwin, and Heather Anderson. In 1991 we won Division 4 and in 1992 both divisional cups came home to Cartmel. In 1994 another piece of silverwear and then promotion in 1996. At last in 1998 promotion again back into the 1st division. It had taken 13 long years but the pleasure was so much sweeter. The following year saw the 2nd XI crowned 4th division champions and so the good times were back.

In 2002 we celebrated our 150th anniversary with matches, a celebration dinner and, for prosperity, a book. Titled ‘Twix Cock and Fairy’ you might well wonder why until you buy the book!! Copies are still available and, at only £5 for a full 288 pages well worth the purchase.