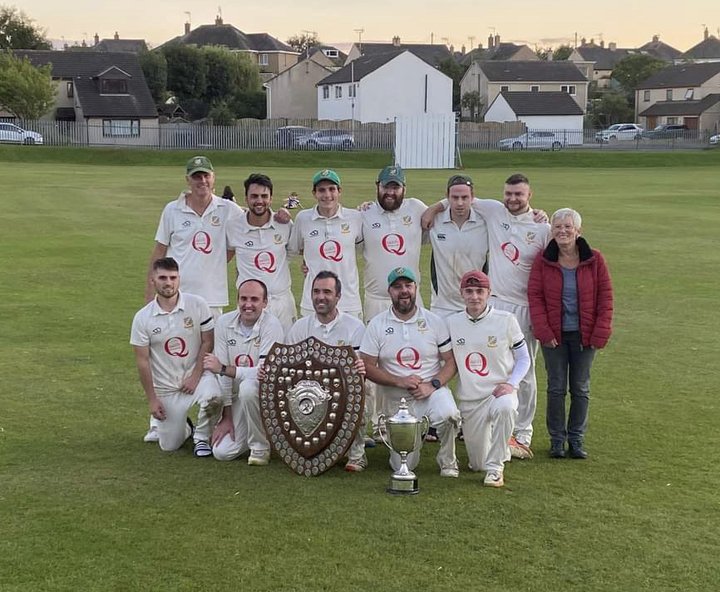 Cricket matches in the Westmorland League went ahead over the weekend with all matches starting with two minutes silence and players and officials wearing black armbands as a mark of respect to Queen Elizabeth II.

Westgate are the 2022 Readers Westmorland League champions. On the penultimate day of the season they went to Heysham three points ahead of the home team and against Heysham’s potent attack slipped to 67/5 with Westgate’s outstanding batter, Craig Buchanan (37) back in the pavilion. Chris Carter has struggled for consistent form this season, but picked the moment to play the innings of his career scoring 52 from 72 balls, and adding 85 with Dylan Conroy. Conroy is a class act, but hobbled by a back problem he missed last week and has been having a strangely fallow period with the bat. Since 2020 he has made only one fifty, but here he batted with his old fluency striking 60 not out from 63 balls, and with James Davies (25 not out) playing his first game for the first team since 2015 took the total to a formidable 204/6. Heysham slipped to 50/3, but Jamie Antcliffe (30) and Damion Keegan (29) took them to 95/3 and gave them a chance. Conroy returned for his second spell and dismissed both settled batters as Heysham lost four wickets for 1 run. Sam Calverley (18) and Sam McClements (23) attempted a rescue act, but captain Andy Hill (2/16) removed both men and then Conroy (5/21) took the last wicket and the celebrations could began for Westgate’s eighth league title and their first since 2017. On Sunday Westgate won the John Scott Trophy to complete a memorable weekend.

Dave Jack (5/22) and Jack Cunnington (3/28) bowled out Milnthorpe for 102, with Phil Bovis making 30 against his former team. Shireshead completed a 9 wicket win with Rick Hamblett scoring 36 not out on first team debut, and Joe Cunliffe (50 not out) making his sixth fifty of the season whilst passing the landmark of 500 league runs in a season for the first time. Ethan Ellwood (62) and Lewis Richardson (70) both made their first league fifty of the season to power Burneside to 211. James Crawford took 5/40 taking his wicket haul to 40, and then with 39 not out secured the draw for Arnside who finished on 132/6 with Ellwood taking 3/17. Shane Hyland (46) battled for Kendal 2nds so they could reach 114 on a difficult pitch at Sedgwick. Jason Dalzell (3/25) was the pick of the bowlers. Sedgwick slipped to 48/7 and when Mike Bracken (25) fell to Andy Dugdale (3/40) and Richard Hanson (7) followed, Sedgwick were 86/9, but Tom Ridley was playing the innings of the game and struck 37 not out (5 fours and a six) to give Sedgwick an unlikely victory, with Dalzell playing the crucial Jack Leach role on 0 not out. Normally relegated teams can’t wait for the season to finish. That isn’t the case for Kirkby Lonsdale who have found their form in the last few weeks and on Saturday James Royce made an outstanding 112 out of 230 all out. Harry Tugman took 3/31 and Jack Benson 4/20 before Royce put on his bowling boots to take 5/12 and with his fellow spinner Andrew Metcalfe taking 5/6 Warton were all out for 72, Graeme Crowther making 33.

Holme secured the Division 2 championship with a comprehensive nine wicket win at Westgate. Kieran Hunter (2/5) and Simon Shipperd (2/6) made the early inroads before Lee Barnes (4/9) finished Westgate 2nds innings on 31. A collapsed drain meant that Coniston hosted Shireshead in the unusual setting of Dalton in Furness. Stan Collinson (56) added a maiden second team fifty to the eight he has scored this season for the third team as Shireshead made 161/7. In reply Bob Simpson made his highest score of the season, 90 from 131 balls, and at 146/5 seemed to be taking them to victory, but Aiden Weir (4/28) returned, and the Cumbria junior who has taken 42 league wickets, to dismiss Simpson caught and bowled, and Coniston finished 4 runs short. Martin Stretch (74) made his first fifty for Carnforth, but with Phil Mason (4/25) and Steve Beck (4/45) bowling well only assistance from Glenn Russell (31) took them to 143. Despite Harry Mason (40) this proved enough as Silverdale were all out for 132, Stretch taking 4/43 and Myles Bowen 3/33.

Sedgwick 2nds secured their place in Division 2 for the 2023 season. They were concerned when Netherfield 3rds bowled them out for 88, Tom Willacy making 26 as Jude Evans took 3/13 and Alistair Reeves 3/15. But it proved ample as Ben Harvey (6/10) and Adam Kershaw (4/6) blew away Netherfield for 25. Pete Blair (35) and Denzil Henderson (30) added 54 for Windermere as the home side were struggling at 74/8 chasing Ambleside’s 177/8 to give themselves a chance of avoiding relegation. Openers Barny Wileman (3/9) and James Greenwood (3/24) returned and Windermere’s fate was sealed as they were dismissed for 128. Adam Wood (37) and Gavin Clayton (30) had been the main run scorers for Ambleside. Stuart Bailey took 6/37 as Ingleton were all out for 98, Matthew France making 22. Bailey then made 40 as Cartmel won by 6 wickets.

Division 4 goes into the final Sunday with Burneside 2nds 7 points ahead of Bare 2nds and 8 points ahead of Morecambe 4ths. Mark Ward (108) made his second hundred of the season and has made 617 league runs at 61.7, not bad for a lad who only took up the game in the last five years. His 17 fours and 6 sixes took Burneside to 179/5, William Johnson taking 4/30 for Sedgwick 2nds. Only Liam Hogan (13 not out) made double figures for Sedgwick as they were all out for 49, Marcus Oates taking 4/16. Rain ended Shireshead 3rds slim title hopes. Needing 148 to win they were 137/4 with overs aplenty remaining and Dave Sloan 50 not out from 37 balls when the rain came. Zak Albon had taken 3/24. Bare’s innings had revolved around 58 from 62 balls from Jonathan Sudell whilst Thomas Atkinson had taken 5/40. Morecambe 4ths beat Netherfield 4ths by 8 wickets, with Joe Jackson undefeated on 40 as they passed Netherfield’s 81.

Dan Teasdale (61 not out), Josh Forrest (48) and Niall Parkinson (46) meant Kirkby Lonsdale 2nds scored a mammoth 262/8 against Coniston 2nds in a game played at Windermere. Steve Gosling took 3/56 for Coniston who managed a draw on 83/9. Andrew Townsley (23) top scored and Forrest took 3/32 and Henry Treverton 4/12. Ingleton 2nds beat Westgate 3rds by 6 wickets. Chris Chappell took a season’s best 5/19 as the home side were restricted to 92 and Ben Melton (38) secured the win.

 Final weekend preview Who will win the Division 4 title?

Champions  Congratulations to our Champions