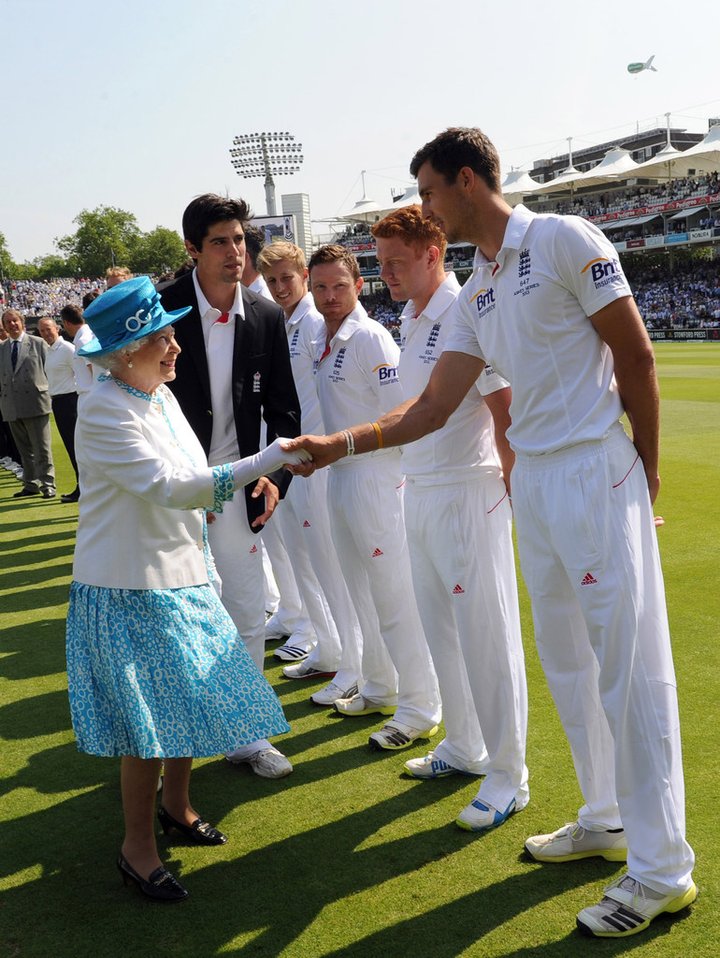 The Westmorland League programme goes ahead today with the League Management Committee asking that all matches hold a two minute silence at the start of the game as a mark of respect to Queen Elizabeth II.

Most games are scheduled to start at 1.30pm. As Ben Stokes has remarked the Queen loved her sport, and players in the Westmorland League have an opportunity today to mark her passing with games of competitive cricket played in the right spirit.

Carr Lane hosts the Championship decider this afternoon between Heysham and Westgate. A Westgate win could give them the Championship at the home of their nearest rivals, whilst a Heysham win would mean that they could win their first title in 61 years at Warton next week. A win for Holme at Westgate 2nds could give them the Second Division Championship if Shireshead 2nds don’t win against Coniston. That game is being played at Dalton in Furness. The competition at the bottom of the table to see who will be relegated with Ingleton is intense. Sedgwick 2nds go to Netherfield today whilst Windermere host near rivals, Ambleside with only two points separating Sedgwick 2nds and Windermere.

Tomorrow the Coniston 2nds v Kirkby Lonsdale 2nds game has been moved to Windermere, with the game of the day being leaders Bare 2nds playing Shireshead 3rds.

Last week 9 points secured against Warton gave Westgate a 3 point lead. Mr Consistent, Craig Buchanan (81 not out) anchored the Westgate innings with his seventh fifty, whilst Sam Frith (61) made his top score of the season enabling Andy Hill to declare after 39 overs on 200/5. When championships are at stake there is no room for fripperies like letting your opener have the chance of a hundred! Paul Simpson took 3/36 for Warton who made a determined reply with Graeme Crowther (49) and Jack Benson (42). Missing the injured Dylan Conroy, Captain Hill juggled his resources, taking 4/33 himself, but Warton hung on at 143/8.

Joe Oliver narrowly missed out on a maiden hundred. Coming in at number 8 after Chris Evans (5/30) reduced Shireshead to 54/6 he added 70 with Jack Cunnington (22) but then ran out of partners having made 95 not out from 89 balls with 17 fours. Aaron Lomas (79) made his third fifty of the season as Sedgwick won by 4 wickets, Phil Oliver taking 3/21. Thomas Shuker (6/37) and Andy Dugdale (3/5) bowled out Burneside for 87 with the veteran off spinner taking a hat trick, the first of his career. Only Mike Dugdale (15) made double figures as Kendal 2nds fluffed their reply with 43 all out as Ethan Elwood took 4/2 and Lewis Richardson 3/8.

It has been pleasing to see relegated Kirkby Lonsdale enjoy some late season form. Mark Beaumont (53 not out) and James Greenall (45) took them to 198/5 against Bare. John Hughes (54) made his fourth fifty of the season and Archit Bhardwaj (32 not out) and Nigel Jones (17 not out) secured a draw on 174/7 after Dan Teasdale took 3/30 and Andrew Metcalfe 3/30. James Parkinson (35) top scored in Milnthorpe’s 101 at Arnside for whom both Kieran Fallows and James Crawford took 3/8. Arnside cantered to a 7 wicket win.

Promoted Holme beat Ambleside by 109 runs. After Brendan Herron (72) had given them a blistering start, Max Pickering and Adam Wood applied the brakes and it took Charlie Outterside (36) to get them to 180 which was more than enough when Joel Bibby produced a sensational 6/2 from 4.2overs to bring the game to an abrupt conclusion. Barny Wileman took 3/44 and Adam Wood 3/43 for Ambleside, whilst only Ben McGregor (37 not out) and Hugh Tyson (23) made double figures. Mathematically Shireshead 2nds are still in contention. Liam Burns (36) top scored in 141 all out with Ben Harvey taking 3/32 and Cam Hankey 3/28 for Sedgwick 2nds. Only Dan Noar (33) really gave Sedgwick a chance as Luke Bray (3/10) and Aiden Weir (3/16) to wickets regularly and they were dismissed for 104. Sedgwick remain 2 points clear of Windermere, who occupy the second relegation position. They lost by an agonising 3 runs, chasing 158 against Netherfield 3rds whose victory secures their own place in Division 2 next season. Steven Robinson (39) and Caleb Wilson (30)
Scored well for Netherfield whilst George Vinall took 5/37. Morgan Henderson (63) and Dan Sykes (38) put Windermere in a great position, but Rob Cope (4/22) and Steve Wilson (3/27) induced a collapse to set up an exciting end to the season.

Ingleton have been relegated and will start next season in Division 3 without two club legends who have announced their retirement at the end of the campaign. Graham Kellett and John Reid have a total of 35 hundreds between them. On Saturday, Keith Forster (60 not out) and Charlie Gaw (55) enabled Silverdale to post 185/6, Josh Capstick taking 3/30. Kellett (27) top scored whilst passing the 500 run mark for the season, but the old firm of Jon Mason (5/44) and Phil Mason (4/27) bowled them out for 98. Joe Cowperthwaite (40) helped Cartmel to 150 at Coniston, but were pegged back by Steve Gosling (3/22) and Robert Warne (3/34). Richard Ivison (67) must have had a dinner date as he teed off with 6 fours and 6 sixes from 28 balls. Warne’s 61 not out from 62 balls was more staid, but Coniston were able to win by 9 wickets in just 18 overs. Like Joe Oliver, Westgate’s David Hughes has never scored a century. In 2001 he scored 99 against Bolton le Sands, and on Saturday at Carnforth he was agonisingly two runs short. He’d made 98 from 119 balls when he was snared by Glenn Russell (3/68). Rory Briggs (76) made a maiden senior fifty and with James Davies scoring 42 not out, Westgate 2nds finished on 259/6. Michael Baxendale (70) and Adam Hornby (55) gave it a go, but with Dakshina de Silva (3/27) weaving his magic, Carnforth 2nds finished on 204/7.

Heysham 2nds are Division 3 champions after bowling out Holme 2nds for 43 and triumphing by 9 wickets. Kyle Hinds scored 125 not out for Leven Valley, receiving good support from Blake Airey (31) in 200/4 which proved too many for Bolton le Sands to chase. Steve Huckle (36) and John Carter (30) provided the foundation for the draw on 146/6. Louis Armer (113 not out) made a maiden hundred for Trimpell hitting 10 fours and 7 sixes and with Ian Semple making 39, the home side made an imposing 204/8 against their neighbours, Morecambe 3rds. Ben Dobson took 4/48. Morecambe have a winning mentality and Kevin Demain (43), Joe Entwistle (42) and Oli Battersby (76 not out) took the promoted side to a 3 wicket win with 2 overs to spare. Battersby has scored 501 league runs at an average of 63. Lewis Spurr (38) and Alfie Hill (45) batted well as Carnforth 3rds scored 158/9. Nobby Lee took 3/19 for Arnside 2nds who despite Chris Till (31) and Darren Barber (39) were all out for 131, Daniel Butterfield taking 4/31 and Gary Baxendale 3/24.

Division 4 is coming to an exciting finish with only 11 points separating Bare 2nds, Burneside 2nds, Morecambe 4ths and Shireshead 3rds. With Bare not playing, Burneside 2nds beat Ulverston 3rds by 10 wickets to narrow the gap at the top to 2 points. Jonah Lowes (28) and Puranas Singh (35) were the only players in double figures as Joe Sorrenson took 4/11. Mark Ward (30 not out) and Mark Kelsall (35 not out) finished the job. Miram Alan (3/10) and Ethan Packard (3/15) bowled Westgate 3rds out for 87 despite 37 from Dave Edwards. Nishanth Arun made a careful 27 not out as Morecambe 4ths won by 7 wickets. Stan Collinson (71 not out) made his highest score in senior cricket and has now scored 920 runs in all cricket for Shireshead this season. With John Bleasdale (50) he facilitated a declaration at 212/4 from 33 overs. Only James Preston (13 not out) made double figures as Ingleton 2nds replied with 58, Tom Brown taking 5/8 against his former side.

 Champions Congratulations to our Champions

Full League programme goes ahead  The WCL programme for this weekend will go ahead as planned. We ask everyone to play the game in a spirit that pays tribute to Her Majesty Queen Elizabeth II and honours her remarkable life and service.