Week 20 review and this weekend’s preview 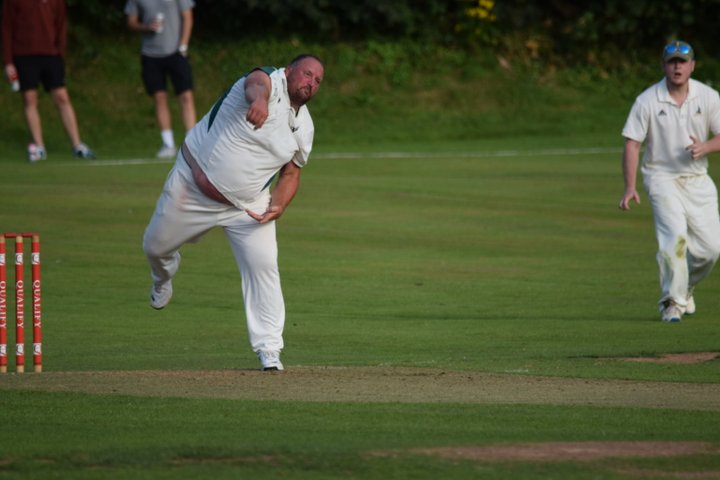 Will it stay fine this weekend?

Andy Hill and his Westgate team will have been anxiously checking the weather forecasts ahead of today’s game. If the weather is kind, then a winning draw or a win against Warton puts them back on top of the table as it’s Heysham’s day off. If Westgate have to settle for 6 points then the sides will be level when they face off next Saturday at Carr Lane, but Heysham will be ahead through having gained more wins. Elsewhere Holme could win Division 2 unless Shireshead 2nds win at Sedgwick. The fact that Sedgwick are playing one of the division’s outstanding sides may give Windermere the opportunity of climbing out of the second relegation place. Heysham 2nds need 5 points to win Division 3 whilst on Sunday wins for Burneside 2nds and Morecambe 4ths could see no more than six points separating the top three as Bare 2nds have no game.

The race for the Westmorland League title goes into September with Heysham six points ahead of Westgate, but having played a game more. Heysham won by 54 runs at Kirkby Lonsdale on Saturday with Lee Calverley (65) scoring his fourth fifty of the season and Lewis Plackett (34) and Damien Keegan (37) taking them to 209/6 declared. Harvey Williams (31) and James Royce (57) kept Kirkby in the match, but Graeme Cassidy (5/15) presided over the all too familiar collapse as Kirkby finished on 153. On Monday they were in some trouble at 44/3, Harry Lee taking 3/39, but Keegan made 62 from 100 balls and with a more expansive Sam Calverley (33) took them to 176. In response no Kendal 2nd XI batter made double figures as the home side were,all out for 37, Jamie Cassidy taking 5/17 and Sam Calverley 3/8. Carl Bevan (41) and Lee Tattersall (33) gave Sedgwick a good start at Westgate, but they fell away to finish on 131 with Dylan Conroy taking 3/21 and Andy Hill 3/22. Sedgwick were hampered by Jonny Matthews limping out of the attack after one over and Craig Buchanan (32) built the reply, but when he was run out after pressure created by Jason Dalzell (4/20), Oliver Sanday and Chris Evans, Westgate were reliant on a mature innings from Jack Huntingdon (40), but when he fell to a brilliant catch by Sanday it needed an injured Dylan Conroy to complete the two wicket win with a runner with only one over to spare.

Burneside hammered Shireshead on Saturday with Ben Phillips taking the best bowling figures of the season. The medium pacer took 8/10 as Shireshead mustered 60 with only Jake Agar (22) in double figures. Burneside needed only 43 balls to achieve a 10 wicket win, Ethan Elwood scoring 44 not out. On Monday Bare beat Burneside by 6 runs. Bare batted first and made 95, John Hughes scoring 27 whilst Curtis Nicholson took 4/17. Archit Bhardwaj (6/15) bowled an outstanding spell and with Robbie White taking 3/17 the visitors upset the apple cart. Bare lost to Warton on Saturday by 5 wickets. Andy Butler (34) and Liam Burrow (36) enabled Bare to total 161 as Harry Tugman took a career best 6/27. Graeme Crowther made an unbeaten 75, enjoying fifty partnerships with Jack Benson (16) and Tom Barnfield (30). Robbie White took 3/26 for Bare. Monday was a memorable day for Warton’s opening batsman, Alex Batson, who scored 124 not out with 13 fours and 4 sixes. With Barnfield making 65 Warton declared on 240/5 from 41 overs. Steve Williams (28), Matt Percy (35) and Ben Ferguson (30) gave Kirkby Lonsdale a start and when Crowther returned to take 4/16 they had the resolve to gain a draw finishing on 164/9.

Sedgwick beat Milnthorpe by 10 wickets on Saturday. Matthew Bailey took 4/24 as only Ryan Veitch (23) and James Parkinson (32 not out) really contributed in 105/8 which Carl Bevan (52 not out) and Robbie Tattersall (41 not out) passed with aplomb. On Monday, Arnside bowled out Milnthorpe for 70 which they passed for the loss of 6 wickets, with Davidson taking 5/6 and Lee Pidgeon 3/15 while Veitch made 20 not out. On Saturday, Alex Davidson (57) scored his second fifty of the season while Adam Richardson (45) passed 500 runs in the league at an average of 57.44 cementing his return to form after a quiet 2021. Kendal’s Thomas Shuker took 4/34 and with 51 wickets at 8.16, the New Zealander is the leading wicket taker.

In Division 2 Holme achieved a mammoth 204 run win against Coniston. Richard Herron (91) and Lee Barnes (51) were the main scorers in 247/6, Mike Burton taking 3/66. Coniston could only manage 43 in response as Simon Shipperd (5/15) and Joel Bibby (4/6) wreaked havoc. Shireshead 2nds 10 wicket win against relegated Ingleton was equally one sided. After openers Graham Kellett (15) and Mark Hughes (13) were out Shireshead’s young attack led by Aiden Weirr (4/19) and Daniel Pye (3/19) bowled out the visitors for 49 which Shireshead passed in 4.1 overs. Harvey Upton (31) and Hugh Tyson (27) were instrumental in Ambleside scoring 132. Sharjito Islam took 4/25 and Jacob Vaughan 4/23 for Westgate 2nds who had little answer to Barny Wileman (5/21) and James Greenwood (3/11) but a painstaking 27 from 94 balls by Vaughan and then Alfred Tostevin (13 not out) and Ryan McMenamin (4 not out) hung on for the draw at 94/9, the last pair facing a total of 83 balls.

Adam Kershaw is leading a one man crusade to keep Sedgwick 2nds in Division 2. After his spell of 6/8 last week, he came to the crease with his side tottering at 46/7 as Alfie Hill (5/26) and Glenn Russell (3/7) ran through the top order. Kershaw hit out making 67 from 46 balls, hitting 8 fours and 3 sixes in his maiden fifty. He added 72 for the last wicket with Paul Sanday (29 not out) to take Sedgwick to a competitive 147. A shellshocked Carnforth 2nds then faced Kershaw the bowler and he delivered 4/9 and with Ben Harvey taking 3/31 Carnforth were all out for 68. Successive wins for Sedgwick means that they are now 4 points ahead of Windermere who occupy the second relegation place, after the Lakesiders lost by 124 runs at Silverdale on Sunday. Sam Letcher (119 not out) and his brother Rob (53) added 154 for the 4th wicket in 228/5 and then Sam took 5/26 and Rob 3/26 as Windermere were all out for 104, Paul,Gillespie (30) top scoring. Netherfield 3rds are 15 points ahead of Sedgwick, but we’re indebted to openers Paul Salmon (48) and Michael Robinson (67) to be able to make 160 as the rest of the batters contributed 32, John Burton (5/34) leading the Cartmel recovery. Bob Davies carried his bat for 55 but Cartmel were 30 runs short as straight bowling by Alistair Reeves (5/29) ripped out the middle order.

Heysham 2nds have to wait another week to be crowned as Division 3 champions after losing to their nearest rivals, Morecambe 3rds by 2 wickets with 2 balls of an excellent game remaining. Richard Townsend (72), James Hesketh (34) and Aiden Yates (29) took Heysham to 174/8, Archie Graves taking 5/34. Kevin Demain (31) and George Battersby (28) gave Morecambe a good start, but after Chris Boak (3/25) got to work, it needed Joe Entwhistle (39 not out) to make a season’s best to bring victory, receiving good support from Ben Dobson (23) and Mike Driscoll (21 not out). Heysham remain 41 points ahead so need only 5 points to win the championship. Trimpell are in 3rd place after making 117 despite Andy Carruthers taking 6/32 for Bolton le Sands who with John Hughes (24 not out) making the highest score of the match ground out a draw on 75/8, Danny Halstead taking 5/20.

Jack Belcher (32 not out) top scored at number 9 for Silverdale 2nds in their 142/9 against Galgate whose captain Matt Cooper took 4/15. Simon Beales who has missed most of the season with injury made 29 not out at number 10, but Galgate were 31 runs short, Jack Dougan taking 4/44. Kendal 3rds bowled out Holme 2nds for 57 and won by 8 wickets, whilst there was a thriller at Milnthorpe where Carnforth 3rds won by 1 wicket. Mark Moorby made 52 from 99 balls in Milnthorpe 2nds 114 as Myles Bowen took 3/31 and Gary Baxendale 3/14. Veteran Bob Baldwin (5/14) showed his class, but teenager Bowen showed determination to make 29 not out from 56 balls with a four and 2 sixes to get Carnforth over the line.

Bare 2nds are 17 points clear in Division 4, but were reliant on Gareth Westworth (45) to make 107 against Kirkby Lonsdale 2nds for whom Josh Forrest (4/37) and Henry Treverton (3/17) held sway. Bare captain, Lauren Burgess passed fifty wickets for the season at an average of 8.81 in taking 3/11 and with Mat Cook (3/13) dismissed Kirkby Lonsdale for 49. Stan Collinson (60) passed 700 league runs for the season adding 98 for the 4th wicket with Dave Sloan (56) as Shireshead 3rds accumulated 201/5 against Coniston 2nds who were determined not to lose, even if they didn’t gain a point for a draw. With Andrew Townsley (24 from 104 balls) they finished on 67/9. Thomas McCartney took 3/16 and Rowan Yates 3/17 for Shireshead.

Dinneshmanickam Annadurai (72) was the reason Morecambe 4ths scored 163/8 declared against Ingleton 2nds. James Lawson (3/32) and Alex Melton (3/51) took wickets for Ingleton for whom Matthew France (62) played a lone hand in 121 all out. Lewis Askew took 3/34 and Surenthar Nedunchelian 3/0 as Morecambe won by 42 runs. William Riley-Gowing scored 57 in Ulverston 3rds 137 against Westgate 3rds, for whom Sunil Naikwadi took 3/23. Jim Craig (51) scored a maiden fifty in senior cricket and with Robbie Green (37 not out) got Westgate in a position where they were able to win by 2 wickets, despite the efforts of Oliver Williams (3/29) and Simon Williams (3/29)

Week 19 Review and Week 20 Fixtures and Preview  A big weekend for Heysham whose 1st team has the chance to return to the top of Division 1, whilst the 2nds can secure the Division 3 Championship.