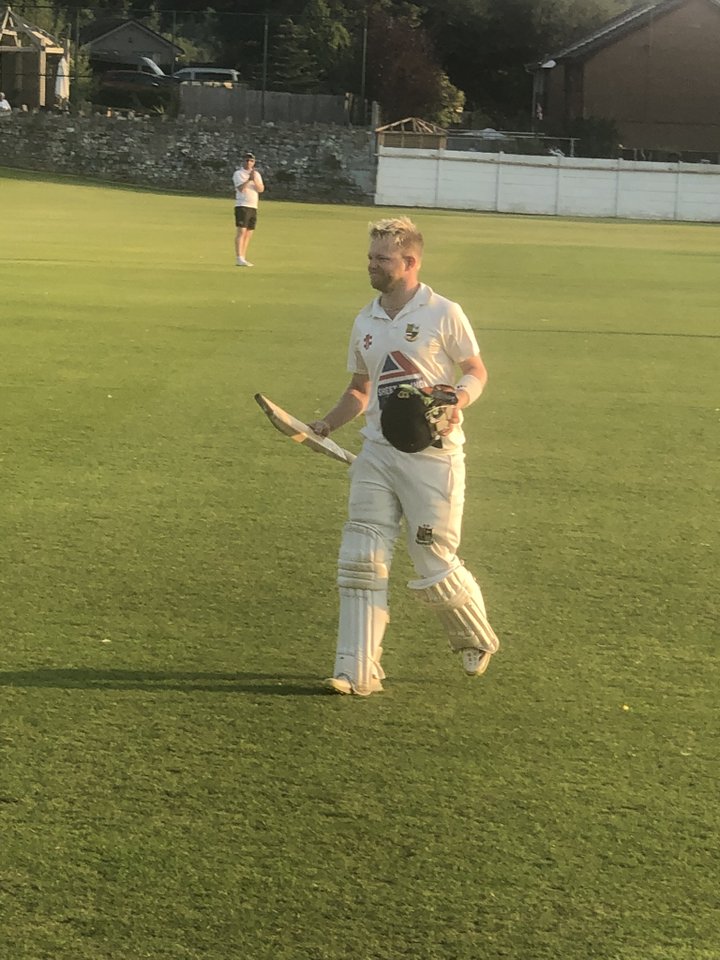 Leaders Westgate will be wary of Kirkby Lonsdale after the home side gained their first win of the season last week, whilst Heysham travel to Bare who knocked them out of the Hackney and Leigh earlier in the season. In Division 2, Holme can seal promotion with a win against bottom club Ingleton, if Cartmel get less than 8 points at Westgate.

The game of the day is Sedgwick 2nds crucial game at home to Windermere. If they can win they bring Windermere and potentially Netherfield 3rds into a relegation fight in the last month of the season. The game of the day on Sunday is the top of the table clash between Bare 2nds and Burneside 2nds.

Westgate extended their lead at the top of Westmorland League Division One to six points after beating Milnthorpe by 7 wickets. Simon Murphy (23) top scored for the home team, but Zak Buchanan (4/21) led the bowling attack to dismiss Milnthorpe for 94. Phil Harvey made 28 in the reply. Despite missing key players Heysham are very much in the mix after picking up 10 points in a draw with Arnside. Damien Keegan (98) narrowly missed out on a first hundred for Heysham and Andy Powers (74 not out) and Lee Calverley (36) took them to 242/4. Arnside were struggling at 61/3 with Eddie Hart retiring with sun stroke. Adam Richardson (114) then played an innings described by spectators as brutal. He hit 14 fours and 6 sixes eschewing running and it took a brilliant over from Sam McClements (3/34) to remove him and ensure that Arnside couldn’t win. Hart returned to join Nobby Lee and the pair saw out the draw on 219/9. Jack Rawlings took 3/37 for Heysham.

Shireshead in third need the top two to drop points. They beat Bare on Saturday who had posted 149/9 with Frank Smith (39) and John Hughes (58) the only batters in double figures as Dave Jack took 4/40 and Phil Oliver who has attained veteran status taking 4/13 from 10 overs. Joe Cunliffe scored 70 not out as the target was reached with just short of 5 overs to spare. A brilliant 83 from Curtis Nicholson, who has been one of the big pluses of Burneside’s season, helped the home club total 241/9 declared against Warton. Ben Phillips (35), Jack Thwaites (49) and Ben Leacock (30) also contributed whilst Paul Simpson took 4/60 for Warton. Alex Batson (40) and Tom Barnfield (46) led the reply, but with Phillips taking 5/35 Warton were all out for 178. There was jubilation at Lunefield Park as Kirkby Lonsdale gained their first win of the season beating Kendal 2nds by 58 runs. Kirkby were in trouble at 55/6 with the league’s leading wicket taker Thomas Shuker taking 3/29. James Greenall (70) then made his highest score for Kirkby from 90 balls receiving good support from Andrew Metcalfe (24) in a partnership of 95 that took the home side to 187 all out. Dan Teasdale (4/28) hasn’t been available regularly but showed his skills as Kendal slumped to 43/4. Will Yarker (32) led the recovery, but Teasdale returned and 120/5 became 139 all out and 15 points for the bottom team.

Holme can be promoted next week if the results go their way. On Saturday they travelled to Carnforth whose 2nds scored 176 all out, experienced pair Graham Dodds (57) and Adam Hornby (39) taking the fight to the league leaders. But the excellent Simon Shipperd (3/16) ensured they were restricted to 176 which Brendan Herron (96) and Liam Teasdale (50 not out) made short work of in a 9 wicket win. Herron has scored 608 league runs at 60.8 this season. Shireshead 2nds are 25 points behind, but they are 42 points ahead of third placed Coniston after beating Ambleside by 9 wickets, with Aiden Weir (5/29) taking a maiden five-for, as Barny Wileman (51 not out) enabled a recovery from 30/5 to 142 all out. Shireshead won easily with Rick Hamblett (108 not out)making his maiden ton for the club.Cartmel beat Sedgwick 2nds by 10 runs. Will Anderson (38), Tom Harvey (37) and Andrew Holmes (33) were to the fore as Cartmel made 167/7, Dan Lawson taking a best of 5/29 for Sedgwick. Unusually Stuart Bailey was out lbw to his son Matthew for 9. No tea for Matthew. Sedgwick were in deep trouble at 84/7, but Lawson (20) and Matt McVey (36 not out) combined to get them close, but not close enough. Stuart Bailey may have relented on any withdrawal of privileges as his 4/49 did most of the damage.

Matthew France (3/46) and Matt Young (3/32) did the damage as Ingleton dismissed Coniston for 127. Mike Burton (49) is the Division’s leading run scorer with 642 at 64.2 and Mark Fryer (35) counterattacked to give the visitors a serviceable total. Mark Hughes made 46, but thereafter it was a procession as Burton (3/27) and Sam Eccles (4/15) as Ingleton collapsed from 88/4 to 90 all out. Silverdale beat Netherfield 3rds by 48 runs. Batting first Silverdale made 154 thanks to Jon Mason’s 60 whilst Dylan Jackson (3/19) achieved his best figures in senior cricket. Hennie Kruger made 59, but Mason completed a memorable day with 3/8 from 9.5 overs. Westgate 2nds beat Windermere by 3 wickets thanks to a superb 54 not out from Joel Frith supported by David Hughes (43) whilst Lewis Rands-Trevor (3/24) performed well for Windermere. Earlier Will Aspinwall (52) had made his third 50 of the season and Ronnie Kydd (31 not out) helped them to 150/7.

Heysham 2nds are 70 points ahead of third placed Arnsdie after they beat them by 75 runs and need just 6 points from their last 5 games to seal Division 2 cricket next season. Chris Boak (39) and Richard Yates (26) added 68 for the first wicket, but Lee Pidgeon (3/23) and Kieran Fallows (3/14) restricted them to 131. Harry Wallbank (4/10), Charlotte Whittaker (3/13) and Chris Boniface (3/20) bowled out the visitors for 56. Morecambe 3rds are 46 points behind in second after Gary Entwistle (66) inspired Silverdale 2nds, receiving good support from Jack Dougan (35) to 196/6, Lawrence Ramakannu taking 4/35. Leg spinner Dougan then claimed the best figures of his career taking 6/16 as numbers 2 to 6 contributed only 1 run as all five were either bowled or lbw. There was no way back for Morecambe but their skipper, Kevin Demain carried his bat for a fine 52 not out as the next highest score was 4. Paul Moffatt took 4/10 as Morecambe were all out for 70. Before all Morecambe’s games a minute’s silence was held for much loved former player Merv Evans who died last week.

Leven Valley beat Galgate by 7 wickets. Maxwell Irving took 3/11 while Tom Speak (29) top scored in 86 which was easily knocked off thanks to Freddie Burrow (38) and Matt Butel (27 not out). Paul Thompson (65), Sam Freear (52 not out) and Andy Muir (34) took Trimpell to 222/6 against Milnthorpe 2nds, Luke Baldwin taking 4/42. Mark Moorby made 20, but it was in vain as Peter McDermid, who started his senior career before Phil Oliver was born for those reading carefully, took 3/14 and Luke Blackburn took 3/3 as Milnthorpe were all out for 57. Kendal 3rds game was played at Carnforth because of a fixture clash with the first team. Paidi Robinson made 53, but Sam Barlow (4/14) restricted them to 118. A maiden senior fifty from Alfie Hill (58 from 69 balls) ensured a Carnforth 4 wicket win, despite Steve Watson taking 3/23. Bolton le Sands looked doomed to finish in the bottom two, but the return of Mark Clarkson has given them hope. Clarkson won the Northern League with Netherfield but has returned with aplomb to his boyhood club. It was Jack Brown (5/39) who took the bowling honours as Holme were limited to 133, Clarkson taking 3/25. Andrew Suddes (30) and Andy Cotton (31) will have hoped that they had set a competitive total, but Clarkson blazed away for a brilliant 97 not out as Bolton le Sands won by 9 wickets.

 Week 19 Review and Week 20 Fixtures and Preview A big weekend for Heysham whose 1st team has the chance to return to the top of Division 1, whilst the 2nds can secure the Division 3 Championship.